The Chia pool protocol has been designed for security and decentralization. It does not rely on any 3rd party, closed code, or trusted behavior.

Some of the protocol's highlights:

Several things can be customized by pool operators, while still adhering to the protocol. These include:

However, some things cannot be changed. These are described in our pool specification, and mostly relate to validation, protocol, and the singleton format for smart coins.

See the Signage and Infusion Points page for more details.

Each signage point is sent along with the sub_slot_iters and difficulty, two network-wide parameters which are adjusted every 4608 blocks (~24 hours). The sub_slot_iters is the number of VDF iterations performed in 10 minutes for the fastest VDF in the network. This increases if the fastest timelord's speed increases. The difficulty is similarly affected by timelord speed (it goes up when timelord speed increases, since blocks come faster), but it's also affected by the total amount of space in the network. These two parameters determine how difficult it is to "win" a block and find a proof.

Since only about one farmer worldwide finds a proof every 18.75 seconds (two signage points), this means the chances of finding one are tiny, with the default difficulty and sub_slot_iters. For pooling, we increase the sub_slot_iters to a constant, but very high number: 37,600,000,000 (37.6 billion), and then we decrease the difficulty to an artificially lower one, so that proofs can be found more frequently.

The farmer communicates with one or several pools through an HTTPS protocol, and sets their own local difficulty for each pool. Then, when sending signage points to the harvester, the pool difficulty and sub_slot_iters are used. This means that the farmer can find proofs very often, perhaps every 10 minutes, even for small farms.

These "partial" proofs, however, are not sent to the full node to create a block. They are instead only sent to the pool. This means that the other full nodes in the network do not have to see and validate everyone else's proofs, and the network can scale to millions of farmers, as long as the pool scales properly. Only one of a given pool's farmers needs to win a block for the entire pool to be rewarded proportionally to their space.

The pool then keeps track of how many proofs (partials) each farmer sends, weighing them by difficulty. Occasionally (for example every three days), the pool can perform a payout to farmers based on how many partials they submitted. Farmers with more space, and thus more points, will get linearly more rewards.

Instead of farmers using a pool_public_key when plotting, they now use a puzzle hash, referred to as the p2_singleton_puzzle_hash, also known as the pool_contract_address. These values go into the plot itself, and cannot be changed after creating the plot, since they are hashed into the plot_id. The pool contract address is the address of a chialisp contract called a singleton or plot NFT. The farmer must first create a singleton on the blockchain, which stores the pool information of the pool that that singleton is assigned to. When making a plot, the address of that singleton is used, and therefore that plot is tied to that singleton forever.

The block reward's payout amount will change according to the halving cycle, detailed in the Block Rewards page. However, the 7/8 - 1/8 ratio will always remain the same.

The farmer can also configure their payout instructions, so that the pool knows where to send the occasional rewards to. Optionally a farmer can opt out of a pool by updating the singleton and then claiming future rewards for themselves.

A partial is a proof of space with some additional metadata and authentication info from the farmer, which meets certain minimum difficulty requirements. Partials must be real proofs of space responding to blockchain signage points, and they must be submitted within the blockchain time window (~28 seconds after the signage point).

A few minutes later, the pool pulls from the queue, and checks that the signage point for that partial is still in the blockchain. If everything is good, the partial is counted as valid, and the points are added for that farmer. 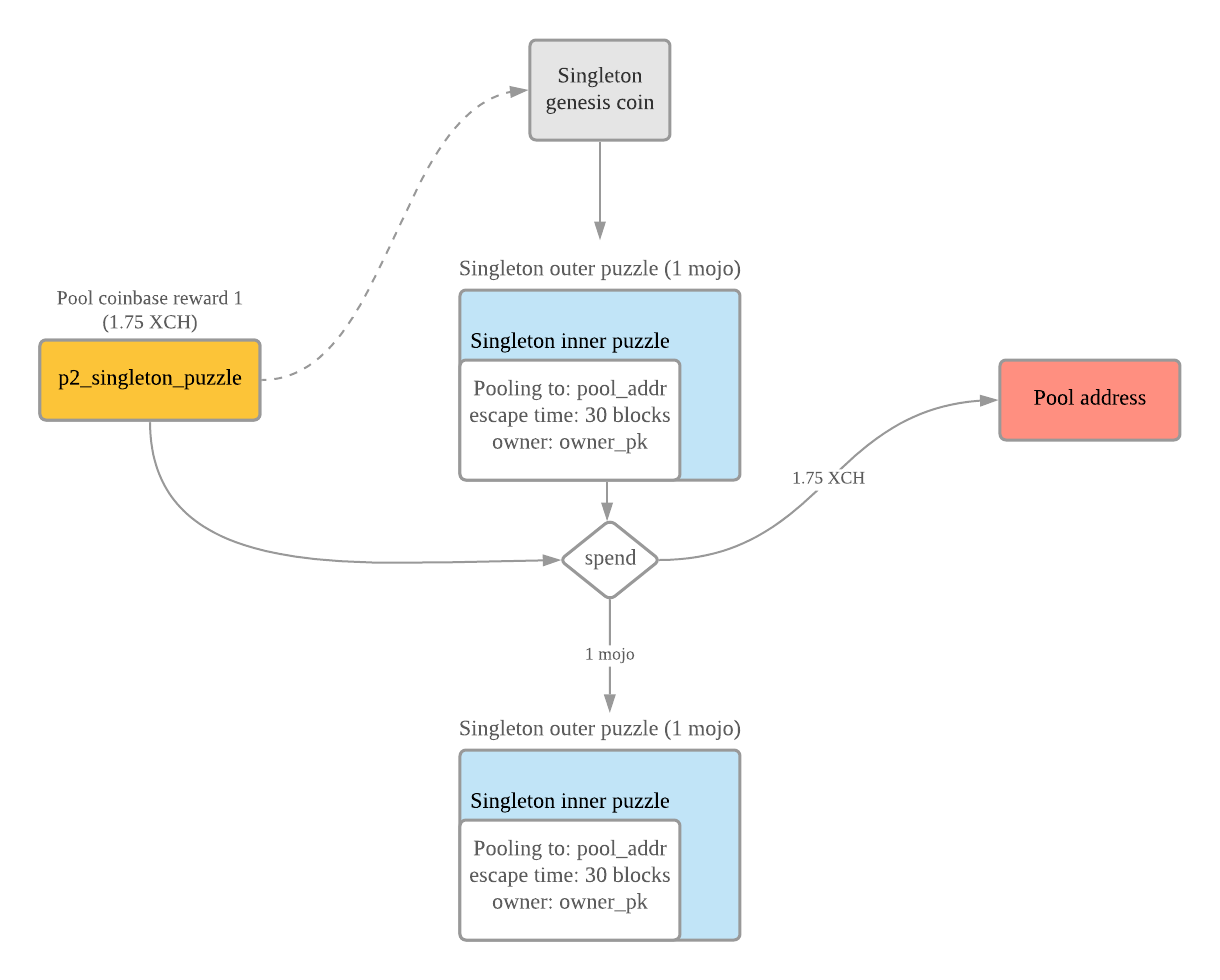 Periodically (for example once a day), the pool executes a payment loop, going through the recent partials that have been submitted by farmers, and making payouts to some, or all farmers. The exact method for computing balance and payout logic can be customized by the pool operator.

Note that the coinbase rewards in Chia are divided into two coins: the farmer coin and the pool coin. The farmer coin (1/8 of the reward, plus transaction fees) only goes to the puzzle hash signed by the farmer private key, while the pool coin (7/8 of the reward) goes to the pool. This split of 7/8 - 1/8 exists to deter attacks where one pool tries to destroy another by farming partials, but never submitting winning blocks.

If a farmer is not a member of a pool, the farmer coin and the pool coin are both sent directly to the farmer.

For example, 100 TiB of space should yield approximately 10,000 points per day, whether the difficulty is set to 100 or 200. It should not matter what difficulty is set for a farmer, as long as they are consistently submitting partials. The specification does not require pools to pay out proportionally by points, but the payout scheme should be clear to farmers, and points should be acknowledged and accumulated points returned in the response.

The following is a simple difficulty adjustment algorithm executed by the pool, provided in the reference implementation:

This algorithm targets 300 partials per day, but different numbers can be used based on performance and user preference.

The pool can also improve this algorithm or change it however they wish.

For example the farmer can provide their own suggested_difficulty, and the pool can decide whether to update that farmer's difficulty. The pool should be careful to only accept the latest authentication_public_key when setting difficulty or pool payout info. The initial reference client and pool do not use the suggested_difficulty.

Note that the payout info can be changed through PUT /farmer. The user can choose where rewards are paid out to, and this does not have to be an XCH address. The pool should ONLY update the payout info for successful partials with the latest seen authentication key for that launcher_id.